It has been a little quiet on the blogging front as I recover from shoulder surgery. However my colleague Nick Burnett has come to the rescue and offered his thoughts about some of the changes happening in education and learning for 2019. Enjoy the read. I will be back with you soon. Meanwhile check out some of my previous leadership trends posts and enjoy this guest post.

I’ve just finished watching the recording of the livestream from the Abundance 360 conference held annually by Peter Diamandis in LA. I always find it an interesting, exciting and shocking event in equal measure. These responses are caused by the amazing creativity and entrepreneurship I observe alongside what Alvin Toffler called ‘Future-Shock’.

I enjoy imagining what can be and actively seek ‘early-adopter’ experiences but in spite of this I do experience a degree of future-shock in what’s coming and how quick it’s arriving.

As has been widely written we are in an era of exponential change when things are changing at an ever-increasing rate, so why is this and what’s emerging in relation to my two fields of focus education and learning?

The key elements that are emerging for me are as follows:

·      The spatial web 3.0 – this is a pretty new term to me, but it looks like it’s going to be huge in 2019 and beyond. A very quick definition is that its where digital content interacts with the physical world in a seamless way. For the Sci-Fi fans amongst you it’ll be like a blend between The Matrix and The Oasis from Ready Player One. It will be driven by the intersections of VR/AR/IoT driven by AI with smart permissions and data security held on Blockchain. Linked to this is that everything and everyone (possibly) will end up with a Digital Twin that are seen as real assets that can be traded/purchased.

·      AR/VR/MR/XR – there are lots of different versions of ‘reality’ and whilst it’s still not clear which will become the dominant form what is clear is that we will increasingly see their use in education and learning. Not only from a student/learner perspective but also in the professional development of the teachers/leaders. In some sectors this is more obvious – firefighters/medical training, but I also believe it will become more prevalent in developing the ‘soft’ skills which are going to be of increasing importance in a largely automated future. These are very much seen as the interface with the spatial web 3.0, along with…

·      Voice as the interface of choice – this is increasingly entering our lives and looks to continue to do as the quality of the AI that drives it improves. There are also a few companies working on ‘silent-speaking’ tech where we mouth the words and the tech can translate this from the muscles used

·      Linked to this is the ongoing move to mobile. We are already very comfortable with accessing any knowledge, anytime and virtually anywhere, and this will continue the shift to learning that is 4A – Anytime, anywhere, anything, anyone, where we will choose, on occasions, to 10x our learning through human interaction on the content. This will become less formalised and the data will be held by the individual in Learning Wallets on the Blockchain, which leads to…

·      Data – there will be increased awareness on the importance of this for the individual and organisations. The importance of cyber-security as more and more highly personalised data is captured. This data can make our lives significantly better or worse in my view and some significant discussions are needed. The amount of data being collected is beginning to explode, and is currently the ‘oil’ for AI, and will become even more significant due to…

·      IoT – the Internet of Things or as is suggested by The Spatial Web 3.0, IoE – internet of Everything. The number of sensors being used will monitor interesting learning and workplace analytics that can be both useful or damaging depending on how they are deployed and what the data is used to do.

All of these require both a new form of leadership and a new form of teaching. The new form of leadership needs to draw on current best leadership practice and research as well as drawing on a range of foresight frameworks and tools to help make sense of what’s happening and to navigate the future. The new form of teaching (which I think is actually now an outdated word or needs to be re-imagined as to what it means) needs to move from digitising what we know and do to digitalising what we know and how we do it. Basically how do we use these emerging and current technologies to augment what we’re doing but to do this we need to be open to different ways of teaching and learning and a term that’s been suggested is cybergogy.

As I said at the start, even for an early-adopter such as myself there are times when all of this feels overwhelming. As leaders, parents, colleagues and friends I believe we have a role to help all of us see the interesting and exciting opportunities rather than being overwhelmed with the shocking.

Nick is an Education and Learning Entrepreneur and Futurist. He is also an author, presenter and executive coach. 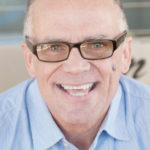 He has a particular interest and expertise in the areas of exponential technologies and their relevance/impact in education and learning. He also has interest and expertise in next level conversations, coaching, leadership, special education and behaviour support. He has been a teacher, senior leader and school principal, and, since 2004, coach, trainer and consultant primarily to those in education, but also to others in the not-for-profit sector.

Good school? It’s complex…
Uniquely Human is a strength
Books for your future reading
Reflections on The Future is Now
The X-shaped Learner
2020 Christmas Reading
Reflections on a Learning City
Beyond a Playbook
Unlearning: Is it a thing?
Learning Futures: Ōtautahi in Action
Categories
Archives